We will move in triangular formations and step on each other's feet.
In Norway on the national election day 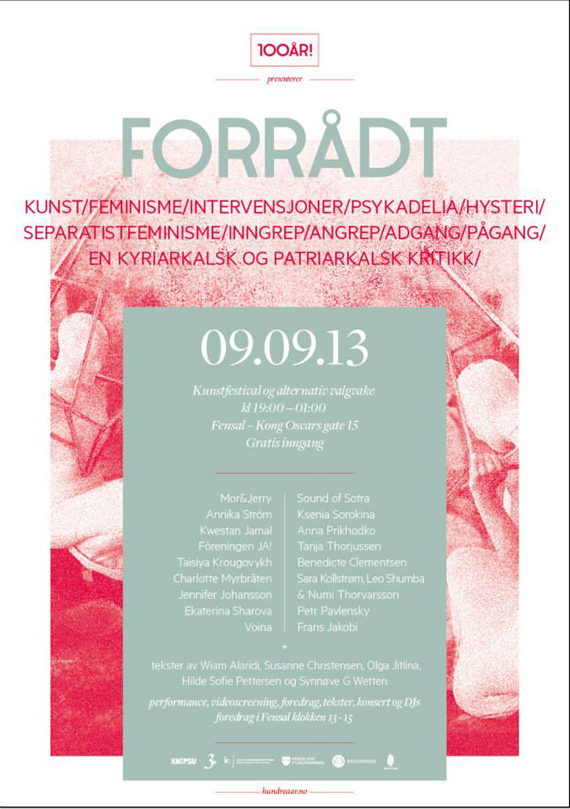 Where do we stand one hundred years later? With the event Betrayed we aim to stuff the election day with ambivalence and contradictions and challenge established power relations. Expect pop-up performances in the streets and squares of Bergen by artists Kwestan Jamal, Frans Jacobi, Annika Ström, and the art rebels Mom & Jerry. At 1pm we invite you all to Fensal for a lecture on the art scene and the art political landscape in Russia by Tanja Thorjussen and Ekaterina Sharova. The evening program starts at 7pm with a video art screening, an artist talk by Russian artist and activist Petr Pavlensky and a performance lecture organized by the Swedish feminist artist collective YES! Association. There will also be performances by students at the art academy. The distribution of texts specially commissioned for the 100år! website will be followed by a concert by Sound of Sotra. The bar is open until 1am and DJ Charlotte Myrbråten is behind the turntables. Admission and access is of course free of charge (if one manages to pass potential obstacles in the way).

The title ‘Betrayed’ refers to the novel ‘Betrayed’, written in 1892 by the Bergen-born author Amalie Skram. The Norwegian word for betrayed can also indicate the words too raw. In extension of the book the title thereby allude to this ambiguity of the word in Norwegian; to the experience of being betrayed as well as the raw nature of our political and social realities. With an international perspective 100år! emphasizes artistic statements that stands for a critical and transformative power – that questions the structures of society and suggests alternative realities. With this event we seek to explore, bring together, invite to participation, mark, celebrate and move forward.

Behind the collaboration 100år! stands the artist-run gallery KNIPSU, the Bergen Academy of Art and Design, and Gallery 3,14. The initiative is a marking and a celebration of the women’s suffrage centenary in Norway and consists of a comprehensive arts and seminar program throughout the year. The active, nomadic and performative shape of the event can resemble that of a living organism. An organism that occurs in Fensal, spreads out, demanding its place and multiplies itself within the participant’s bodies and minds.

This project is supported by Hordaland County, Bergen City and the Freedom of Expression Foundation, Oslo