We will move in triangular formations and step on each other's feet.
THE MISCEGENATIONS PROJECT 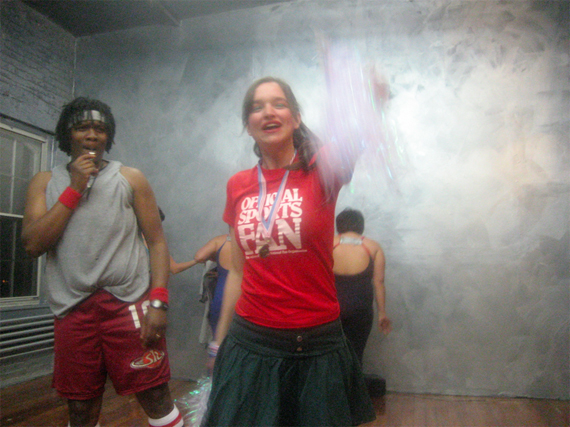 Presentation of THE MISCEGENATIONS PROJECT: Writer/performers Lea Robinson and Elizabeth Whitney will discuss and present excerpts from THE MISCEGENATIONS PROJECT, an ongoing performance and digital storytelling workshop that explores intersections of identity with a focus on race, gender identity, and sexuality. THE MISCEGENATIONS PROJECT takes its name and inspiration from anti-miscegenation laws in the U.S.A. that prohibited interracial marriages—the last of these laws were removed as recently as the late 1960’s. Robinson and Whitney believe that this is a crucial moment to revisit anti-miscegenation histories as a platform to discuss relationships among racial discrimination and cultural battles over same-sex marriage and genderqueer identities.

Artists bios: Lea Robinson & Elizabeth Whitney are partners in life & performance and were recently included in GO Magazine’s 100 Women We Love. For the past five years they have developed THE MISCEGENATIONS PROJECT, a performance and digital storytelling workshop that explores intersections of identity with a focus on race, gender identity, and sexuality. Together they have brainstormed pioneering performances of gender, such as the butch-femme country-western drag act, “Sissy & Cocoa Chaps: The Urban Cowdykes,” and the soon-to-be world famous hooping duo, “Bitches With Barrettes”. They are the originators and former hosts of the Works in Progress series at The Theater Offensive in Boston, and regular performers in The Femme Show. Their new performance SYRUP IN OUR SHORTS, AND OTHER SOUTHERN PLEASANTRIES was included in the 2010 July HOT! Festival at Dixon Place (NYC). Elizabeth and Lea live in New York City where they work as artists and academics. For more information on their individual projects see www.learobinsonactor.com and www.elizabethwhitney.com