We will move in triangular formations and step on each other's feet.
(Dis)agreements? – the utility, effectiveness, and problematics of categories, a teach-in (2010) 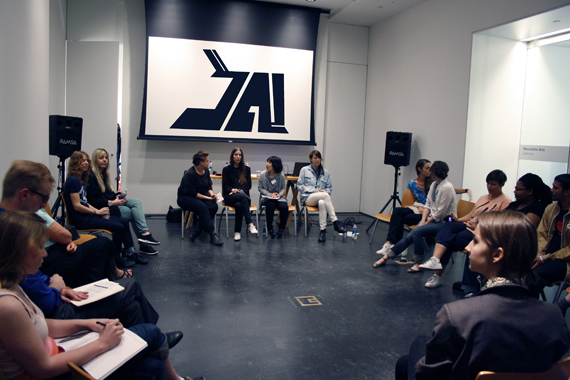 (Dis)agreements? – the utility, effectiveness, and problematics of categories

(Dis)agreements? – the utility, effectiveness, and problematics of categories. Performance; a video with audio 6:00 min, an agreement, a teach-in 45:00 min, a letter. YES! Association / Föreningen JA! in collaboration with Hong-An Truong, Elizabeth A. Sackler Center for Feminist Art, Brooklyn Museum, 2010

May 22, 2010 we participated in making ourselves visible: a day-long project in feminist space-making initiated by Jen Kennedy and Liz Linden at the Sackler Center, Brooklyn Museum with the teach-in (Dis)agreements? – the utility, effectiveness, and problematics of categories.

We began the teach-in by making the following statement: We will start by making an announcement; We are very happy and excited to share with you that the Brooklyn Museum and YES! Association / Föreningen JA! have signed YES! Association / Föreningen JA!’s Equality-Diversity Agreement #3. This has not yet been publicly announced, but we decided since this is such a special occasion to share our news with you already today. We will soon watch a short video* with footage from the actual signing of the agreement, followed by short interviews with Brooklyn Museum staff, artists and visitors about the anticipated effects of this. The different opinions expressed can be used as starting points in the discussion that will follow after the screening, when each of you will get a copy of the Equality-Diversity Agreement #3. Before watching the video we want to extend our deepest gratitude and thanks to everybody at the Brooklyn Museum for their involvement, especially Director Arnold Lehman and Judy Kim, one of the museum’s main curators for their courage, patience and support during the negotiations, thank you Melissa Chou, Brooklyn Museum’s lawyer who has worked so enthusiastically on the agreement, but most of all we want to thank the Sackler Center, all its staff and especially Elizabeth Sackler who really is the person who has made this possible and bridged the dialogue between YES! and the Brooklyn Museum. Thank you all very much! 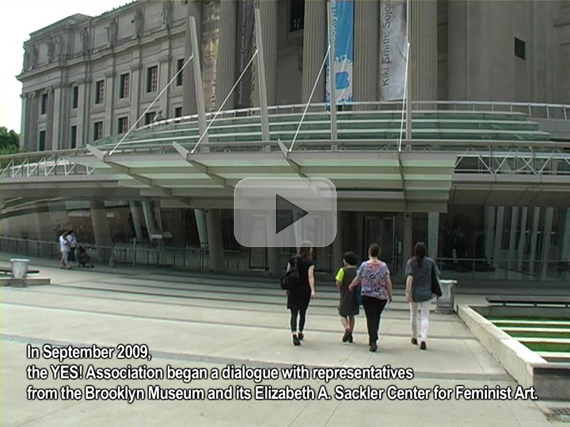 May 26 we sent out the following email to everybody participation in the teach-in:

We want to thank all of you who participated in our teach-in (Dis)agreements? – the utility, effectiveness, and problematics of categories at the Sackler Center, Brooklyn Museum, Saturday May 22 (and thanks to all of you who wanted to be there but couldn’t). Your feedback, thoughts, objections and cheers meant a lot to us and will be very helpful in our continued work.

We are writing this letter to announce that the Equality-Diversity Agreement #3 we shared with you and discussed during the teach-in was real, its politics were real, the time and effort, patience and passion put into writing the agreement was real. The moment (euphoric for some and dysphoric for others) of “is-this-really-happening-in-my-lifetime?!” feeling was real. The claim that the Brooklyn Museum has signed the Equality-Diversity Agreement #3, however, was not real. And the video was fiction.

When we were invited to give the teach-in about half a year ago our first intention was to start negotiating and collectively formulate an agreement together with the staff at the Sackler Center and discuss this process with you at the teach-in. Due to time restraints and miscommunication we were unable to do this, but decided to proceed with the project anyway if not in reality, then in the realm of fiction. To this end, we staged the teach-in as a rehearsal for the future.

We wanted to give us all a chance to discuss the agreement, feminist politics and art institutions, how we can make institutions accountable, the utility, effectiveness, and problematics of categories from a positive, contingent starting point beyond the familiar “this-will-never-happen-anyway” position. We took this opportunity, as artists and dedicated hard working feminists to start from the other end so to speak. Discouraged by constant NO!s we wanted the discussion to begin with a big collective YES! to see were that would take us.

By making real what we wanted to be real, we had hoped that the situation would produce real-time effects. What actualized during the workshop was a productive and intense conversation that might not have happened if the situation wasn’t assumed to be real. It evoked reactions and emotions that are the crux of both the problematics and potentialities of such an agreement.

We are now hoping to begin a positive communication with the Sackler Center in reality. If you felt mobilized by taking part in this rehearsal please write to us and share your comments or opinions on how to improve the agreement, or suggest other ways of making institutions accountable to a feminist end. Or, if you would rather stay in the realm of fiction, why not write to the Brooklyn Museum and congratulate them on signing our agreement?

Again, we would like to thank you for being part of this utopian moment (at least for us) and ask you to understand our strategic use of fiction. We sincerely hope that we will have the honor to share a similar moment with you again not too far in the future.

Read more about making ourselves visible: a day-long project in feminist space-making here >>

*This video is strictly fictional, based on a script by the YES! Association / Föreningen JA!. The characters are performed by actors and are not meant to represent or resemble anybody working at the Brooklyn Museum. The views expressed by the characters in this video are based on discussions we have had with numerous people and are meant to further and deepen discussions regarding the implications of the Equality-Diversity Agreement.