We will move in triangular formations and step on each other's feet.
Equal Opportunities Agreement (#1, 2005) 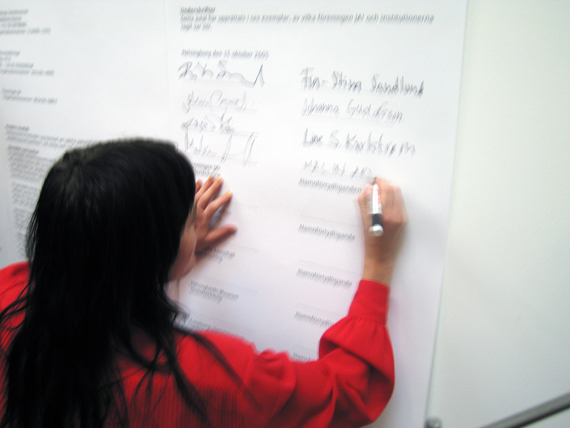 The artists Line S Karlström, Johanna Gustavsson, Malin Arnell, Anna Linder and Fia-Stina Sandlund were brought together in February 2005 by the art historian Eva Hallin, for a conversation about “feminist strategies of resistance”, in preparation for the production of the catalogue accompanying the exhibition Art Feminism – Strategies and effects in Sweden from the 1970s up to the present day. This exhibition was organized by the art historian Barbro Werkmäster and Riksutställningar, Dunkers Kulturhus, Liljevalchs Konsthall – all institutions funded by the Swedish state.

With this meeting as a starting point and through our following conversations we began, as a group, to reflect over the boundaries of the exhibition. We agreed that the exhibition Art Feminism was an important and valuable, but also very sensitive initiative. A lot was at stake. We were critical of how the preparations of the exhibition were carried out. To start with we were concerned that the hidden agenda was, in fact, that Liljevalchs Konsthall and Dunkers Kulturhus needed to improve their bad reputations in regard to gender representation in their exhibition programs and acquisitions. Furthermore, the participating artists would receive only a minimal artist fee, which was not a good sign either. Many of the participating contemporary artists work with performance or process oriented projects, but, with only one exception, their works were represented in the show merely through documentation. Thus, the message was that there really is no budget for showing contemporary feminist art in Sweden. Another problem was that since the beginning of the preparations, the list of participating artists has not included artists of any other ethnic background than “Swedish”. The curatorial group was well informed by queer theory, but nowhere did they consider an intersectional perspective, which according to us, is the most appropriate analytic tool to use to analyse power structures and hierarchies. We regarded the plan to squeeze together approximately 120 of Sweden’s most trendsetting artists and categorise their work under different themes, as belittling. Works with a political force risked becoming annexed brands lending their brilliance to the establishment. We felt that the curators of Art Feminism presented singular feminist art pieces but were not working informed by a more complex understanding of feminism as a political force. In our opinion they failed to think beyond the formal aspect of the show on how feminism could be implemented throughout the entire production of the show and thereby also practiced. Additionally, we felt that the exhibition through its focus on the 1970’s, risked turning out to be a “safe” exhibition; an exhibition pointing backwards. We shared a wish of being the artists pointing forward and we wanted to see the feminist discussion of today included in the exhibition. In the light of our brave, strong and fantastic predecessors and with the support of all brilliant feminist actors within the contemporary art scene, we decided that it was time to help Sweden’s public art institutions to tackle their inequality problems by offering them to sign our Equal Opportunities Agreement that we eventually set up for the occasion. Were the institutions behind the exhibition Art Feminism (and other art institutions that in theory claim to be against discrimination) ready to practice what they preached? Were they ready for a legal agreement – to take responsibility for their expressed wish for equality and sign a binding contract?

That is the story. And as the saying goes, the rest is history.

Below you can read the Equal Opportunities Agreement (#1, 2005) that YES! Association/Föreningen JA! proposed to set up between YES! Association/Föreningen JA! and the institutions hosting the exhibition Art Feminism – Strategies and effects in Sweden from the 1970s up to the present day; Dunkers Kulturhus, Liljevalchs konsthall, Hälsinglands Museum, Gothenburg’s Museum and Riksutställningar (Swedish Travelling Exhibitions). The Equal Opportunities Agreement (#1, 2005) was made public at Dunkers Kulturhus in Helsingborg, 15th of October 2005. It was through the declaration of this agreement that the YES! Association was founded.

The institutions hereby agree to observe equality regarding gender and ethnicity in exhibition programming, acquisitions and staff recruitment.

Equal practice in relation to gender

According to this agreement, an equal exhibition program in relation to gender means that at least half of the exhibited works should be made by women. The practice would still be seen as equal should more than half of the works be made by women, as female artists have been, and still are, underrepresented at the state funded art institutions.

According to this agreement, an equal acquisition policy in relation to gender means that at least half of all acquired works should be made by women. The acquisition budget should be equally divided between the sexes. The institutions should aim for the entire collection to reach these standards.

According to this agreement, an equal staff recruitment policy in relation to gender means that at least half of the positions advertised after the agreement has been signed should be filled by women. The institutions should have equal distribution of men and women across salary levels as a long term goal.

Equal practice in relation to ethnicity

According to this agreement, an equal practice in relation to ethnicity means that the institutions’ selection of authors should reflect the ethnic diversity of society. The institutions are responsible to find current information about the ethnic make up of society from Statistics Sweden (Statistiska Centralbyrån) or other trustworthy sources.

According to this agreement, an equal staff recruitment policy in relation to ethnicity means that the positions that are advertised after the agreement has been signed should be filled in a way that reflects the ethnic composition of society at the time. The institutions should have as a long term goal to mirror, across salary levels, the ethnic make up of society.

If, after evaluation, an institution is found not to be in compliance with this agreement, the institution will have to pay a fine of 10 000 SEK (to be adjusted yearly by percentage in relation to the base amount), for each percentage of deficient distribution in regards to gender or ethnicity within the exhibition programming, acquisitions and recruitment. The fine is payable to YES! Association/Föreningen JA!’s fund, which has been established to financially support artists who have been victims of discrimination due to their gender, ethnicity or sexual orientation.

YES! Association/Föreningen JA! and the institutions each have a copy of this agreement.