We will move in triangular formations and step on each other's feet.
12th October, 2017 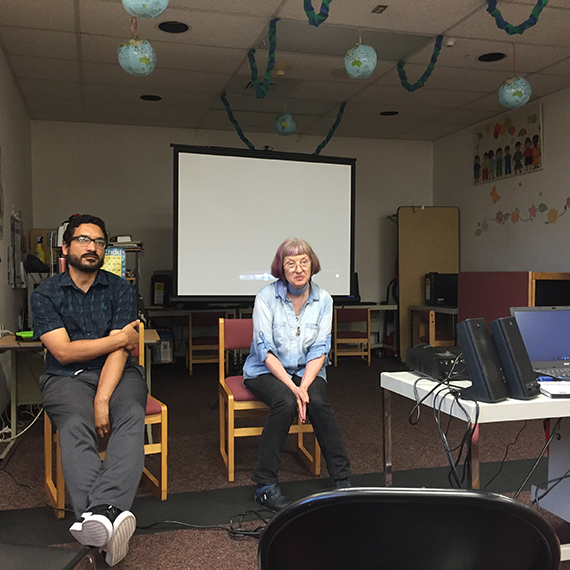 As one component of our site-specific work, “A New Spelling of a Street: A Tribute to Audre Lorde,” within the exhibition “The Work of Love, The Queer of Labor,” at Franklin Street Works in Stamford the movie “A Litany for Survival: The Life and Work of Audre Lorde” was screened on August 16th, 2017. 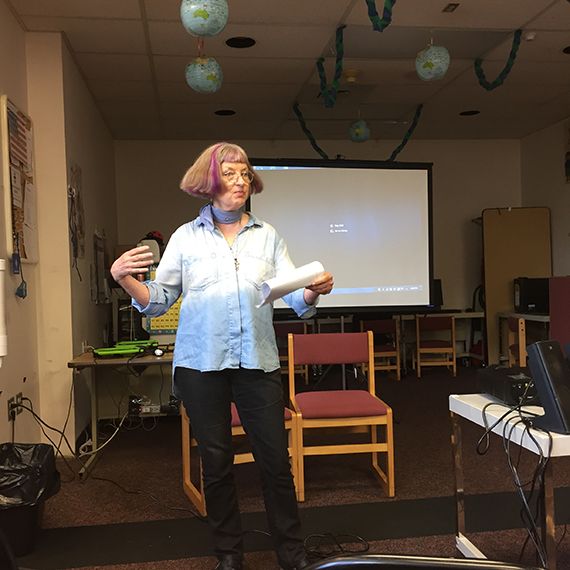 The screening is part of the educational programming for our current exhibition “The Work of Love, The Queer of Labor,” and one component in a commissioned art project for that show by the Swedish artist collective YES! Association / Föreningen JA! Their site-specific work, “A New Spelling of a Street: A Tribute to Audre Lorde,” aims to honor Lorde, who described herself as a “black, lesbian, feminist, warrior, poet, and mother.” In the 1950s Lorde worked at Keystone Electronics, located at One Dock St. in the South End of Stamford, where she also met her first girlfriend. YES! Association / Föreningen JA!’s project includes a request to change the name of Dock St. to Audre Lorde St. in honor of this important American figure. This program is designed to inform the community in South End Stamford and beyond about Lorde’s life, work, and history in Stamford, Connecticut. 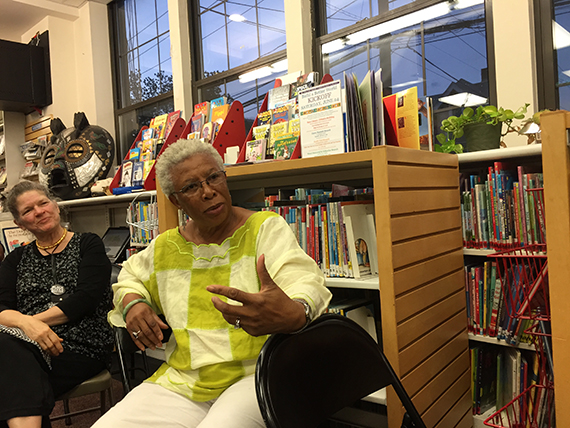 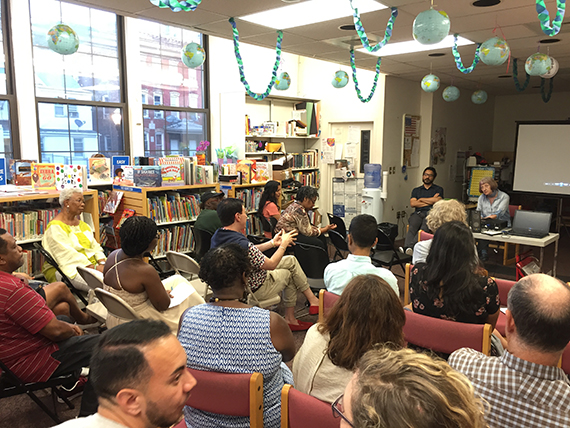 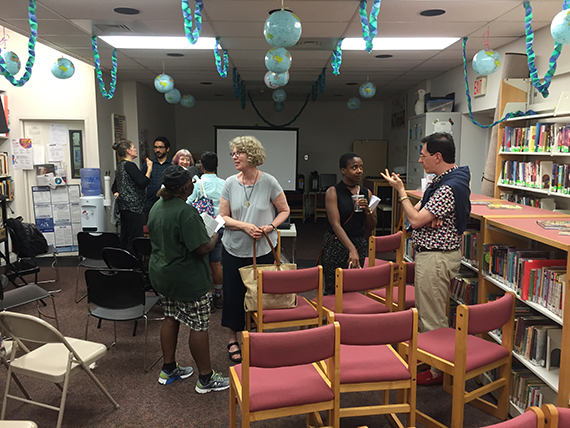 Short review on the show “The Work of Love, The Queer of Labor” at Franklin Street Works

Tobias Carroll writes about our ongoing work New Spelling of a Street – A Tribute to Audre Lorde in the short reviw Labor, Intimacy, and Revolution: An Unlikely Artistic Convergence in Vol. 1 Brooklyn.

“Since the 2016 Presidential election, some within the American left have suggested the existence of an inherent tension between advocating for the working class and being an inclusive movement for those of all sexualities. The art in the recent show “The Work of Love, The Queer of Labor” at Franklin Street Works stands as a welcome counterargument to that. The art featured within examines areas in which queer sexuality and issues surrounding the working class overlap. The scope of these works is international, covering a century of history; the result is an illuminating look at the place where these two movements converge.

In some cases, these connections are inherent in the subject covered. YES! Associate / Föreningen JA!’s New Spelling of a Street – A Tribute to Audre Lorde chronicles the Swedish art group’s attempts to have a street in Stamford renamed in honor of the writer/activist in question. Lorde worked for a time in Stamford in the 1950s, a period of her life that, this work argues, was both personally and professionally significant for the life and work that followed.”

YES! Association / Föreningen JA! are happy to announce that we will be part of the group exhibition Performing Relationships at KV Leipzig. The exhibition is initiated by Krisztina Hunya_Daniel Niggemann and will be on view June 29 – August 13, 2017. Opening: June 28, 2017, 7 pm

YES! Association / Föreningen JA! will participate with a second version of the durational participatory action All that you touch You Change. All that you Change Changes you (2016-2017).

Below you can read the exhibition statement by Krisztina Hunya_Daniel Niggemann:

“what comes to mind when I hear the word Kunstverein;“
Heimo Zobernig (1992)

Collaboration, negotiation and complicity were the main premises for re-establishing KV – Leipzig in 2014. The heterogeneous backgrounds of the board and association members were immediately seen as a positive opportunity to establish a non-hierarchical model for collective decision-making. Within this process the members of KV make a continuous effort to rethink pre-determined roles and keep them fluid, whilst forging alliances and making potential conflicts productive. Concurrently, KV aims to lay the foundation for an enduring working structure and embed an institutional art space within the city’s infrastructure as well as beyond it. The project Performing Relationships takes the collective experiment of the KV as a starting point, entering a productive realm which straddles professional project work, ambitious leisure activity and growing responsibilities for the people involved.

Since the 1960s, group interactions have increasingly been at the core of artistic engagements, often in order to interrogate the image of the solitary artistic genius as well as the prevailing conditions of production and presentation. The exhibition Performing Relationships brings together ten artistic positions that approach collective structures in a variety of ways ranging from scrutiny and experiment to testing and proof. Not only are performative and pedagogical strategies at stake but also photographic-speculative and archival approaches, as different spaces for action emerge within and beyond KV.

Collaborative practice and collective creativity are regarded as means of resisting the capitalist process of specialisation and eschewing the individual artist persona propagated by the dominant art (market) system. They are, moreover, geared towards providing a performative critique of social institutions and experimental structures that reveal society’s capacity for self-organisation.

The project Performing Relationships understands collaboration to be a continuous learning and thinking process that is reflected in the artistic commissions exhibited, in the polyphonic voices of the KV members themselves and in their ongoing research endeavours.

YES! Association / Föreningen JA! are happy to announce that we will be part of the group exhibition The Work of Love, The Queer of Labor, at Franklin Street Work, Stamford, CT. The exhibition is curated by Yevgeniy Fiks and Olga Kopenkina and will be on view between May 21 – August 27, 2017.

YES! Association / Föreningen JA! will participate with the video documentation of We Will Open a New Front – lecture by Lee H. Jones #1 (2010) and a new work in progress: A New Spelling of a Street – A tribute to Audre Lorde (2017).

Curator statement:
In exhibition “The Work of Love, The Queer of Labor”, queerness is discussed through the lens of class and vice versa. Selected artists’ works in the proposed project represent a desire for liberation through critically engaged connections between class, gender and sexuality. LGBTQ identities are reviewed from the class perspective in order to re-discover political potentialities within a countercultural paradigm of queerness. While exploring queerness through the relationship with class, the exhibition interrogates the possibility of love in a class-based society, in which the difference between work, as a productive force in capitalist economy, and labor, as a condition of biological life, is almost gone. Artists’ creative work, once avant-garde and independent, became alienated and inseparable from market economy. Likewise, love and sexuality became abstracted from the site of their enactment. Will queer activities, which are driven by “true desire,” not norms, restore love and produce new relationships between people based on equalities to all forms of love and labor? Artists who present their works in the exhibition extend this desire to all people. The struggle for queer rights is all our struggle! Artists are: Angela Beallor, Hugo Gellert, Montague Glover, Noam Gonick, Hagra, William E. Jones, Erik Moskowitz+Amanda Trager, Jaanus Samma, and YES! Association / Föreningen JA!. The exhibition will consist of drawings, video, installations, and film projections.

A new job to unwork at – Symposium

On Saturday, February 25, curators Andrew Kachel and Clara López Menéndez will host a day-long symposium at Artspace in conjunction with A new job to unwork at. A lineup of workshops, talks, and performances will involve artists featured in the exhibition, as well as other artists, writers, performers, and students whose practices explore the ways cultural production is enmeshed in a larger network of labor relations and social contexts. The symposium is free and open to the public. 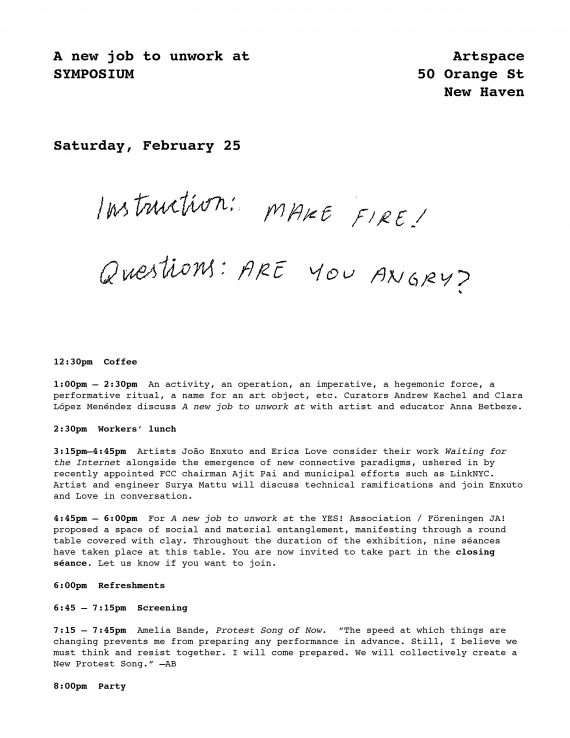 YES! Association / Föreningen JA! is pleased to announce that our new durational participatory action All that you touch You Change. All that you Change Changes you.* (2016-2017) will be part of the exhibition A new job to unwork at December 2, 2016 – March 4, 2017. Curated by Andrew Kachel and Clara López Menéndez for Artspace in New Haven, CT.

A new job to unwork at investigates work as a social, material, and economic process, as well as a legitimating discourse that privileges certain activities and life choices. The exhibition is the result of an ongoing research that examines work’s crucial role in shaping our identities and our experiences of the world we live in. The artists in this exhibition explore this understanding of work with regard to cultural production, its relation to broader labor conditions, and current social and political movements. In a field increasingly reliant on the figure of the precarious freelancer and characterized by individualistic entrepreneurial values, these artists look toward renewed possibilities of resistance through strategies of dialogue, dependence, and care. If on a modest scale, this project aspires to support nascent models of speculative world-making and activism through forms of artistic labor.

The title A new job to unwork at is borrowed from Valerie Solanas’s cult feminist text SCUM Manifesto (1967), which calls for women’s active and systematic dismantling of the patriarchal labor force by disobeying its laws and destroying its infrastructures. Such an orientation toward work evinces a communist utopia—“SCUM salesgirls will not charge for merchandise; SCUM telephone operators will not charge for calls”—while also acknowledging the piecemeal and ongoing nature of this struggle against dominant ideologies and structural violence: “SCUM will unwork at a job until fired, then get a new job to unwork at.”[1] Solanas’s manifesto is a node in a critical tradition that can be traced back to Marx’s analysis of estranged labor, which argued that “Labor produces not only commodities; it produces itself and the worker as a commodity.”[2] This idea is brought to bear on a contemporary socioeconomic context in Kathi Weeks’s recent feminist analysis of the concept of “work ethics,” in which she questions the indiscriminate valorization of work, and its rarely questioned investment with value. As Weeks writes, “What is perplexing is less the acceptance of the present reality that one must work to live than the willingness to live for work.”[3]

An earlier iteration of A new job to unwork at was organized at Los Angeles Contemporary Exhibitions (LACE) in spring 2016 in the shape of a research platform. A group of local artists and curators met weekly to engage with the core ideas of the project, and gave it shape through the collaborative production of a syllabus (accessible at: anewjobtounworkat.tumblr.com). For the project’s current iteration at Artspace, the curators will continue to implement this localized approach, engaging diverse New Haven constituencies to unpack issues of labor as they relate to the specific educational and social politics particular to this place.

*The title All that you touch You Change. All that you Change Changes you. is taken from Parable of the Sower by Octavia E. Butler, 1993.